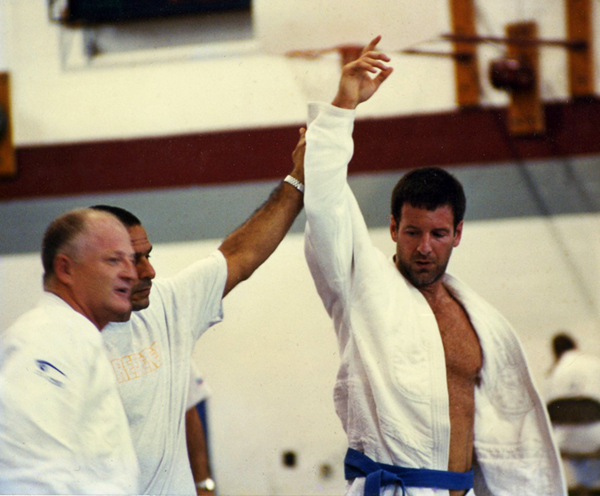 Warrior Way has a large kids program taught by instructors with backrounds in education. The practice of Martial Arts is a routine that improves focus and self discipline, developing the mind as well as the body. Students learn to control themselves to respect others, which naturally leads to a respect for self, improving self-esteem and self-confidence. This benefit often carries over into school, helping to not only improve behavior, but academic performance. Experts agree that, rather than promoting violence, Martial Arts open the door to building a solid foundation of self-confidence and a healthy sense of self worth. The core philosophy of Warrior Way’s Kids training is non-violence. When faced with a violent situation, our students are trained to respond in a calm and controlled way that will stop, rather than escalate, violence.

Warrior Way has the distinction of having the longest running Brazilian Jiu-Jitsu program in the state. Almost every school and instructor in Michigan can trace their training in Brazilian Jiu-Jitsu back to Warrior Way. Second-Degree Black Belt Professor Harvy Berman has worked tirelessly to help grow the sport in Michigan. With over 20 years of experience, Professor Harvy can trace his lineage back to the Gracie Family, who developed the art in Brazil almost 90 years ago. Warrior Way also has the only full-time staff of several Black Belts teaching all the classes at Warrior Way.

In 2003, Warrior Way added the skills of World Champion Muay Thai Kickboxer Matee Jedeepitak to its already impressive staff of instructors. During his time as a professional fighter, Matee held two of the most prestigious titles in his homeland of Thailand, the Lumpinee and World Muay Thai Council championships. During his time in the United States, Matee also added the I.K.F. Pro San Shou Welterweight World Championship to his collection. With over 200 professional fights, there is no one in the midwest that has achieved what Matee has inside the rings of Thailand. As an instructor, Matee uses his lifelong experience to help students perfect the traditional style of Muay Thai Kickboxing at Warrior Way and across the country in his seminars.

Our goal at Warrior Way is to help people better their lives through self confidence, discipline and physical fitness that training in the Martial Arts can bring. Based on reality, our systems provide you with a realistic form of self-defense that anyone, regardless of age or physical ability, can learn. Though Warrior Way has produced several BJJ World Champions, Muay Thai Champions, as well as amateur and professional MMA champions, Warrior Way’s number one priority us teaching the basics in a structured and safe enviornment. As a way of honoring those who protect us, Warrior Way also worlds closely with the local law enforcement to help keep those in uniform safe while on duty.